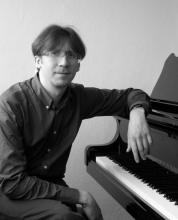 Piotr A. Komorowski, composer and music theorist; b. October 14, 1977 in Łęczyca. He began his musical education at the State Music School I and II in Kutno, which he attended in 1989-1997. In 1997-2002 he studied music theory at the Faculty of Theory of Music and Composition at the Music Academy in Bydgoszcz. From 2002, he continued his studies at the same faculty in the composition class of prof. Marek Jasinski, which he graduated in 2005.